When you unlock 1Password there are lots of secrets it needs to manage. There are the secrets that you see and manage such as your passwords and secure notes and all of the other things you trust to 1Password. But there are lots of secrets that 1Password has to juggle that you never see. These include the various encryption keys that 1Password uses to encrypt your data. These are 77-digit (256-bit) completely random numbers.

You might reasonably think that your data is encrypted directly by your Master Password (and your secret Account Key), but there are a number of technical reasons why that wouldn’t be a good idea. Instead, your Master Password is used to derive a key encryption key which is used to encrypt a master key. The details differ for our different data formats, but here is a little ditty from our description of the OPVault data format to be sung to the tune of Dry Bones.

And that is a simplification! But it is the appropriate simplification for what I want to talk about today: Some of our intrepid 1Password for Windows beta testers can start using a version of 1Password 6 for Windows that will have an extra protection on that “master key” described in that song. We have been working with Intel over the past few months to bring the protection of Intel’s Software Guard Extensions (SGX) to 1Password.

Soon (some time this month) 1Password for Windows customers running on systems that support Intel’s SGX will have another layer of protection around some of their secrets.

SGX support in 1Password isn’t ready for everybody just yet as there are a number of system requirements, but we are very happy to talk about what we have done so far and where we are headed. I would also like to say that we would not be where we are today without the support of many people at Intel. It has been great working with them, and I very much look forward to continuing this collaboration.

What does Intel’s SGX do?

Intel, as most of you know, make the chips that power most of the desktop and laptop computers we all use. Their most recent CPUs include the ability for software running on Windows and Linux to create and use secure enclaves that are safe from attacks coming from the operating system itself. It is a security layer in the chip that cryptographically protects regions of operating system memory.

SGX does a lot of other things, too; but the feature I’m focusing on now is the privacy it offers for regions of system memory and computation.

A program running on a computer needs to use the system’s memory. It needs this both for the actual program and for the data that the program is working on. It is a Bad Thing™ if one program can mess with another program’s memory. And it is a security problem if one program can read the memory of another program. We don’t want some other program running on your computer to peer what is in 1Password’s memory when 1Password is unlocked. After all, those are your secrets.

It is the operating system’s (OS’s) job to make sure that one process can’t access the memory of another. Back in the old days (when I had to walk two miles through the snow to school, up hill, both ways) some operating systems did not do a good job of enforcing memory protection. Programs could easily cause other programs or the whole system to crash, and malware was very easy to create. Modern operating systems are much better about this. They do a good job of making sure that only the authorized process can read and manipulate certain things in memory. But if the operating system itself gets compromised or if some other mechanism might allow for the reading of all memory then secrets in one program’s part of memory may still be readable by outsiders. 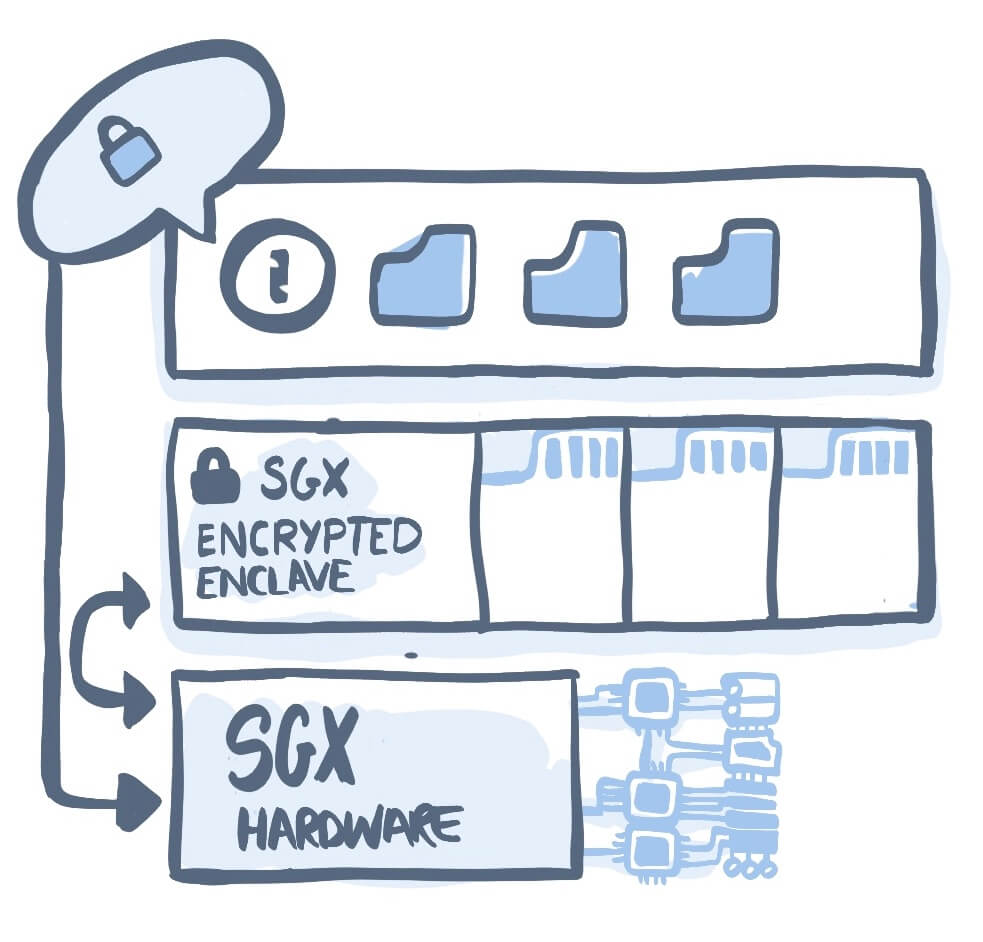 So what we are looking for is the ability to encrypt and decrypt regions of memory quickly, but using a key that the operating system can’t get to. Where should that key live?  We can’t just keep it in the the innards of a program that the operating system is running, as the operating system must be able to see those innards to run the program. We can’t keep the key in the encrypted memory region itself because that is like locking your keys in your car: Nobody, not even the rightful owner, could make use of what is in there. So we need some safe place to create and keep the keys for these encrypted regions of memory.

Intel’s solution is to create and keep those keys in the hardware of the CPU. A region of memory encrypted with such a key is called an enclave. The SGX development and runtime tools for Windows allow us to build 1Password so that when we create some keys and call some cryptographic operations those will be stored and used with an SGX enclave.

An enclave of one’s own

When 1Password uses certain tools provided by Intel, the SGX module in the hardware will create an enclave just for the 1Password process. It does a lot of work for us behind the scenes. It requests memory from the operating system, but the hardware on Intel’s chip will be encrypting and validating all of the data in that region of memory.

When 1Password needs to perform an operation that relies on functions or data in the enclave, we make the request to Intel’s crypto provider, which ends up talking directly to SGX portions of the chip which will then perform the operation in the encrypted SGX enclave.

Not even 1Password has full access to its enclave; instead 1Password has the ability to ask the enclave to perform only those tasks that it was programmed to do. 1Password can say, “hey enclave, here is some data I would like you to decrypt with that key you have stored” Or “hold onto this key, I may ask you to do things with it later.”

What’s in our enclave? Them keys, of course! 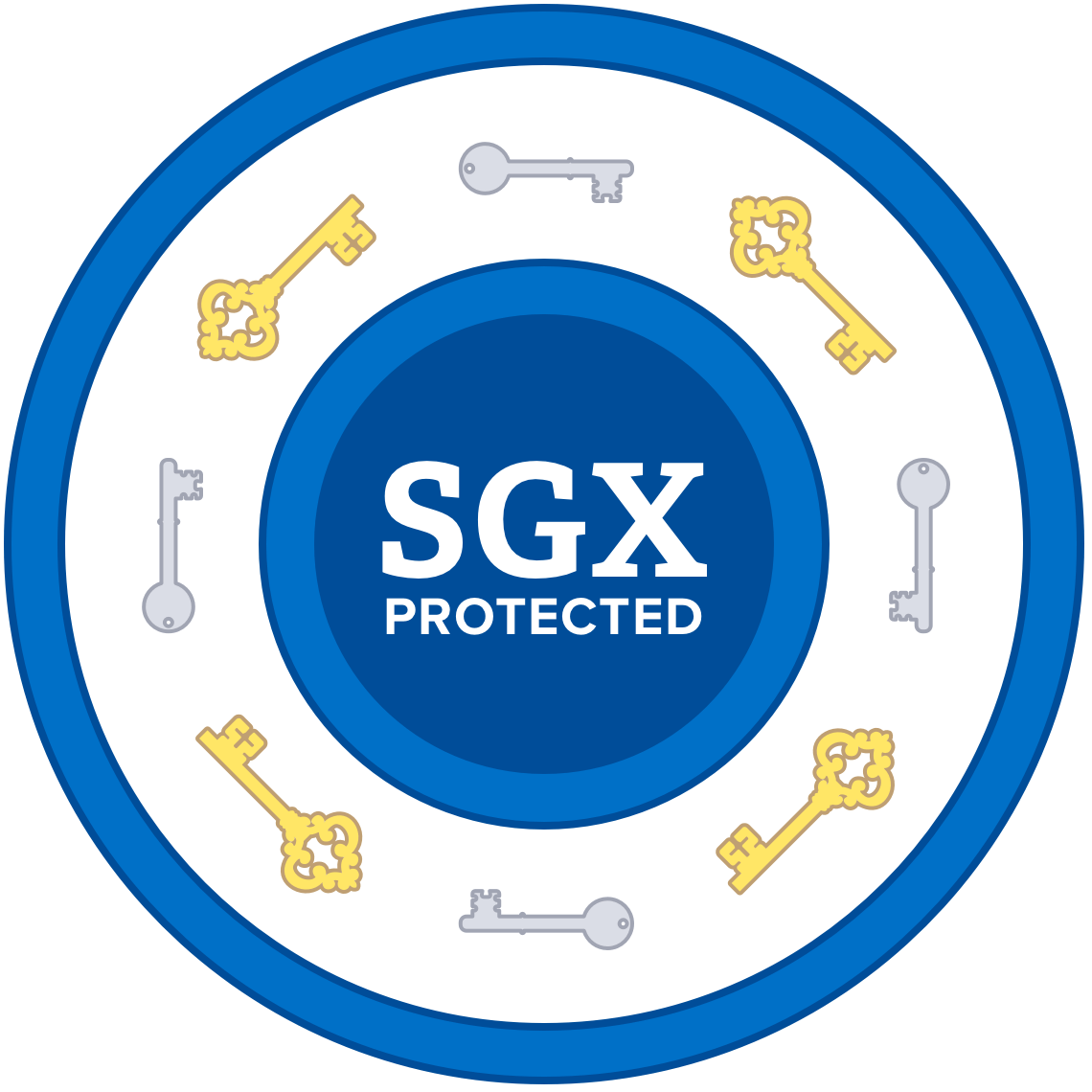 When you enter your Master Password in 1Password for Windows, 1Password processes that password with PBKDF2 to derive the master key to your primary profile in the local data store. (Your local data store and the profiles within it are things that are well hidden from the user, but this is where the keys to other things are stored. What is important about this is that your master key is a really important key.)

What does (and doesn’t) this protect us from?

I must start out by saying what I have often said in the past. It is impossible for 1Password (or any program) to protect you if the system you are running it on is compromised. You need to keep your devices free of malware. But using SGX makes a certain kind of local attack harder for an attacker, particularly as we expand our use of it.

The most notable attacks that SGX can start to help defend against are attacks that exploit Direct Memory Access. Computers with certain sorts of external ports can sometimes be tricked in allowing a peripheral device to read large portions of system memory.

As we expand and fine tune our use of SGX we will be in a better position to be more precise about what attacks it does and doesn’t defend against, but the ability to make use of these enclaves has so much potential that we are delighted to have made our first steps in using the protections that SGX can offer.

What will be in our enclave in the future?

As we progress with this, we will place more keys and more operations involving those keys into the SGX secure enclave. What you see today is just the beginning. When the master key is used to decrypt some other key that other key should only live within the enclave. Likewise the secret part of your personal key set should also have a life within the enclave only. I can’t promise when these additions will come. We still need to get the right cryptographic operations functioning within the enclave and reorganize a lot of code to make all of that Good Stuff™ happens, but we are very happy to have taken the first steps with the master key.

We do not like promising features until they are delivered. So please don’t take this as a promise. It is, however, a plan.

Among the features of SGX that I have not mentioned so far is the ability to seal an enclave. This would allow the enclave to not just keep secrets safe while the system is running, but to allow it to persist from session to session. Our hope is that we can pre-compute secrets and keep them in a sealed enclave. This should (if all goes to plan) allow 1Password to start up much more quickly as most of the keys that it needs to compute when you first unlock it can already be in an enclave ready to go.

A sealed enclave would also be an ideal place to store your secret 1Password.com Account Key, as a way of protecting that from someone who gains access to your computer.

1Password can only make use of SGX on some Windows PCs running on CPUs with Intel’s Skylake CPUs and which have been configured to make use of SGX. Thus SGX support in 1Password is not going to be available to every 1Password user. So it is natural to ask whether 1Password’s security depends on the platform you use.

Well, there is the trivial answer of “yes”. If you use 1Password on a device that hasn’t been updated and is filled with dubious software downloaded from who knows where, then using 1Password will not be as secure as when it is running on a device which is better maintained. That goes without saying, but that never stops me from saying it. Really, the easiest and number one thing you can do for your security is to keep your systems and software up to date.

The nontrivial answer is that 1Password’s security model remains the same across all of the platforms on which we offer it. But it would be foolish to not take advantage of some security feature available on one platform merely because such features aren’t available on others. So we are happy to begin to offer this additional layer of security for those of our customers how have computers which can make use of it.

I’d like to conclude by just saying how much fun it has been breaking through (or going around) layers. People like me have been trained to think of software applications and hardware being separated by the operating system. There are very good reasons for that separation — indeed, that separation does a great deal for application security — but now we see that some creative, thoughtful, and well-managed exceptions to that separation can have security benefits of its own. We are proud to be a part of this. 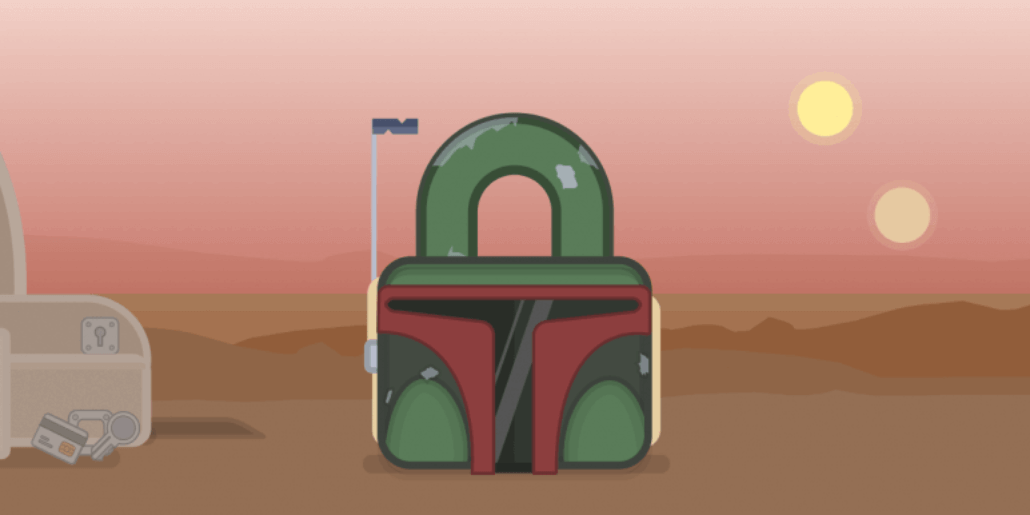 Send in the crowds (to hunt for bugs)