In the rapidly changing world of eternal mathematical truths, we need to innovativize for the sustanation of our competitive advantage. So instead of serving our customer base with the same old encryption algorithms that are used by governments, military, and most of the Internet, we want to provide the world with new, proprietary systems that should clearly set us apart in the marketplace and among the expert community.

With great pleasure, I’d like to introduce our forthcoming encryption system: Cipher of Advanced Encryption Substitution And Rotation (CAESAR).

No salt but the finest 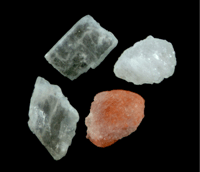 Using block equality (described below) largely obviates the problem of obtaining a good salt or nonce in our cryptography. But because we will be transitioning to our new system, there are cases where we still need to find a good salt. Most cryptographic implementations have been written in the C programming language, and so for past decades the fashion as been for C-salt. C-salt, of course, was an improvement on table salt, which entirely failed to discourage the use of tables in cracking passwords.

Times have changed, and C-salt is now passé. Instead people have been discovering the virtues of Himalayan salt. Thus we sent off an expedition to Pakistan, Afghanistan, Nepal, India, and Bhutan to find and bring back the finest and rarest of salts for our encryption recipes. To protect our interests, this salt and its origins must remain secret.

Pretty much all computer ciphers are based on the theory of finite groups. CAESAR is no different. Indeed, despite the fact that we just came up with the system recently, the use of groups and rotation in CAESAR may fairly be said to be precedent setting. Yeah, history can be weird that way.

We are faced with one difficulty in our approach. Our expedition to far off lands described above discovered something that completely shocked us in addition returning with a source of salt. They discovered that not everyone speaks English. Not only did this astonishing discovery lead to our researchers submitting a number of papers to various academic journals (oddly, we have not heard back from them), and caused considerable delays and expense for the expedition itself; it also means that our original rotation would not work as effectively in alphabets that use more than the English letters A through Z.

After careful consideration of this issue, we realized that requiring such people to use English would actually increase their security. They would be using a language that those around them may not be able to read, thus giving them a second layer of encryption. This showed how forward thinking our design was. It automatically provided higher security in some unanticipated cases.

All blocks are equal!

One of the problem with the kinds of block ciphers is their lack of equality when used in CBC or CTR modes. We, however, want to return the spirit of ECB mode in which all blocks are equal (Credit for this particular insight goes to the people at 0-Day Clothing).

In addition to the fairness issues in support of the notion that all blocks should be treated equally, it must be noted that mathematics is built on the notion of a mathematical function. Ensuring that a given input produces a unique value, turning to something like ECB mode helps restore us to mathematical purity.

Where to from here?

I have provided only a few of the highlights of CAESAR and our new thinking in cryptography. This custom made, bleeding-edge scheme will doubtless place us in a unique position in the security community. Look for more new projects in the future, possibly a year from the date of this article’s publication, April 1. One we are looking at is System of Natural Additive Key Encryption—Overloaded In Layers.

The ABCs of XRY: Not so simple passcodes