Suppose you are one of the 130 million people who’s oddly encrypted passwords were among the Adobe password breach. Suppose that you used the same password there as you do for PayPal.

Only a fraction of the people who are reusing passwords will make that clear in their password hints. We already know password reuse is common. We also know that criminals do indeed exploit password to steal from people.

I am very tempted to explain all about Adobe’s peculiar method of storing passwords. It’s really a cool story with lots of interesting lessons, and explaining it would involve poorly encrypted pictures of a penguin.

I am also tempted to dive into gory details of the statistical properties of the data, the analysis of which has kept my computer busy for days on end. Likewise, I could rant about Cupid Media’s failure to encrypt or hash passwords for 42 million customers. Or I could talk about privilege escalation and the MacRumors discussion forums breach of 860,000 hashed passwords a week earlier, leading to the capture of all 860,000 hashed passwords.

But it is far more important for me to repeat what we’ve said in many different ways and at many different times: Password reuse—using the same password for different sites and services—is probably the biggest security problem with password behavior.

We want to fix that.

But think back to those dark days when you needed to come up with passwords on your own. You probably picked from a small handful that you had memorized, so now you’re stuck with a bunch of sites and services for which you used the same password. 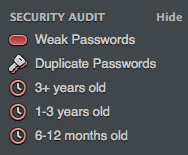 Getting all of those old passwords sorted out is going to be a chore, but it doesn’t have to be done all at once. Best of all, 1Password 4 for Mac can help, thanks to its new Security Audit feature.

Let’s use an analogy: say that Molly (one of my dogs, and not really the cleverest of beasts) has just started using 1Password. She has a few passwords, but not many. Even though she doesn’t know how to push open a door that is already ajar, she can make use of the new Security Audit tool in 1Password for Mac.

In the left sidebar of 1Password 4 for Mac, down toward the bottom, there is a section called “Security Audit”. When Molly clicks (or paws) “Show” next to “Security Audit” she sees a number of audits available. She can select “Weak Passwords”, which will show her all of her items with weak passwords. She can also look at password items that are old. But the selection we are interested in today is “Duplicate Passwords”. 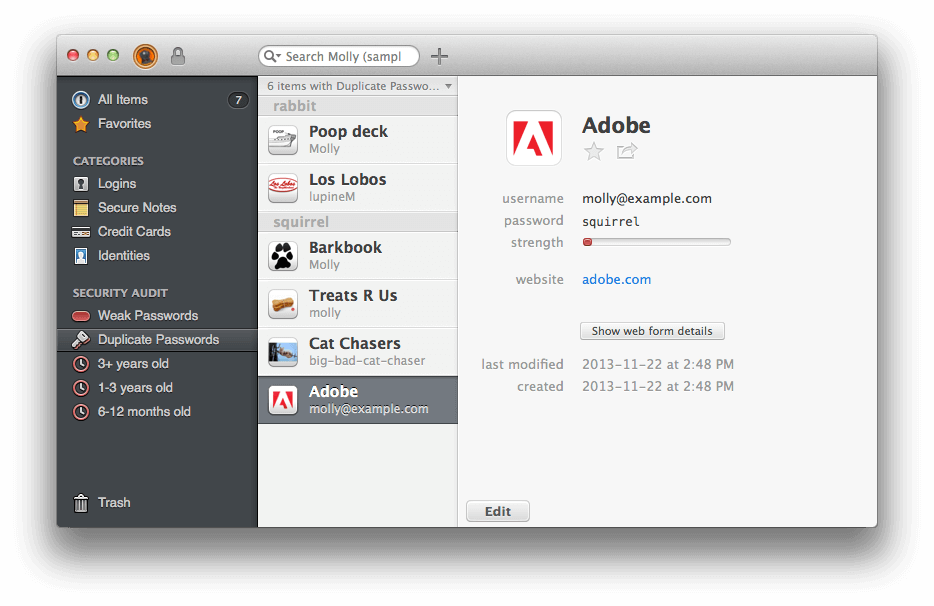 What Molly sees is that she has two sets of duplicates. One of them is used for two Logins, and the other one is used for four Logins. As we can see, her Adobe.com password of “squirrel” is used for her Barkbook, Treats R Us, Cat Chasers Logins as well. 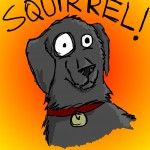 Molly should, of course, go to each of those sites and change her passwords on them. But there are squirrels in the back yard to bark at, and changing all of those passwords may seem overwhelming. So Patty (the cleverer dog in the family) advises Molly to think about which of those Logins are most crucial. Molly can’t tolerate the thought of anyone else getting a treat; so she starts with Treats are Us.

This does mean going to the Treats are Us site and using its password change mechanism. 1Password is smart, but it isn’t quite smart enough to go browsing through the sites to find their password change pages. Molly may decide that her Barkbook Login is also very important, and so will change that one right away as well.

Ideally, Molly should fix all of her weak and duplicate passwords as soon as possible. And as Molly has only a handful of Logins, she could do that. But for those of us who may have a large number of old accounts, it is probably best to check Security Audit and update reused or weak passwords at the most important sites first. Then, updating other passwords a few at a time is an easy way to make all our accounts much more secure.

The NSA can do what to my iPhone?